What is a fibroid?

Fibroids are non-cancerous growths that grow or develop in or near the uterus.
The growths are formed of muscle and fibrous tissue, and their size varies. They are sometimes referred to as uterine myomas or leiomyomas. 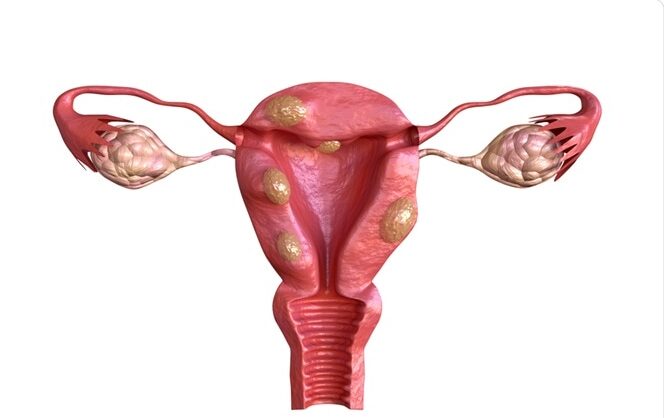 Fibroids are classified into three types:

What are the causes of Fibroids?

The cause of uterine fibroids is unknown, while research suggests that there may be a genetic link. There is no specific external exposure that can cause a woman to develop fibroids.

What are the Signs and Symptoms of Fibroids in the Uterus?

The majority of women with fibroids will have no symptoms at all. Large or several fibroids, on the other hand, might cause the following symptoms:

Fibroids are most commonly discovered during a physical examination. During an abdominal or pelvic exam, your doctor may feel a solid, irregular (often painless) mass.

What are the risks of uterine fibroids?

It is unusual for fibroids to have serious health implications. Women, on the other hand, can experience severe bleeding, which can result in hazardous anaemia, or a lack of red blood cells.

Large fibroids can occasionally push on the bladder and the tube (ureter) that transports urine from the kidney to the bladder. This pressure can harm the kidneys. Infertility and frequent pregnancy loss are two more problems that can arise.

Anti-inflammatory pain relievers such as ibuprofen or naproxen may reduce fibroids-related menstrual flow and give pain relief. This is the most conservative treatment option and is advised for women who experience intermittent pelvic pain or discomfort as a result of fibroids.

Conservative surgical treatment. Myomectomy is a treatment that removes fibroids while leaving the uterus intact. This method is suggested for women who want to keep their fertility. There are three basic procedures of myomectomy:

Open Myomectomy: This is the most common type of myomectomy. The operation is done through an abdominal incision and entails some hazards, such as haemorrhage and scar tissue formation at the incision site, as well as a prolonged recovery time. Depending on the size and quantity of fibroids, this method may be required.

Depending on the size and quantity of fibroids, this method may be required.

Myomectomy can be performed laparoscopically or robotically. A laparoscope and small “keyhole” abdominal incisions are used in this outpatient surgery. This less invasive method frequently leads to less bleeding and a quicker recovery, although it is not appropriate for all people. Most patients go home the same day as their operation and recover in a few weeks.

Myomectomy through hysteroscopic surgery. During this outpatient treatment, your doctor will cut off visible portions of the fibroid tumours with a camera introduced through the vagina. This procedure is exclusively used to treat fibroids that have developed within the uterine cavity.

Uterine Artery Embolization (UAE): Commonly known as uterine fibroid embolization, is a relatively new procedure. By cutting off the blood flow to fibroids, this minimally invasive treatment reduces them. UAE is performed by an interventional radiologist with the assistance of X-rays.

Another newer procedure is radiofrequency ablation of fibroids, in which heat is administered to the fibroids under laparoscopic and ultrasound guidance to shrink and soften them. The potential consequences on fertility are still unknown.

Depending on the size of your uterus, the location of the fibroids, and your medical history, the treatment can be performed vaginally or abdominally through a major incision, laparoscopically or robotically.

Because a hysterectomy is a significant procedure, it is only indicated to treat fibroid cases in women who do not want to keep their fertility. Because it removes the potential of recurrence, it is the most effective method of fibroid treatment.

KK speciality clinic and hospital is one of the best hospital in Western suburbs of Mumbai for all types of laproscopic surgery and treatment for fibroids.

Request a Call Back

Fill in your details and our team will get back to you within 24 hours.

Fill the form to get further details