Gynaecological Cancers refers to a medical disorder in which cancer or tumour cells form in a woman’s reproductive organs. These include cervical cancer, ovarian cancer, uterine cancer, vaginal cancer, and vulvar cancer.

There are various symptoms linked with gynecological cancers, with each cancer type having its own set of symptoms, and the only way to determine which one you have is to seek a proper consultation. 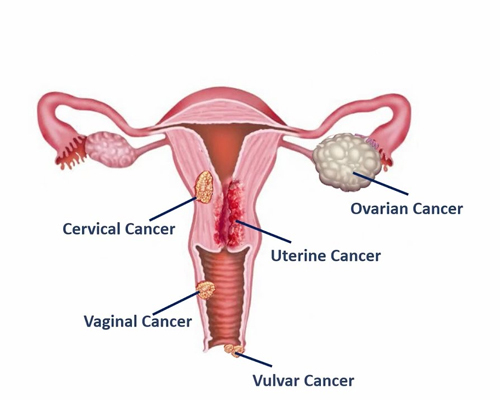 The following gynaecological cancers are rather common and affect a substantial number of women each year:

Cervical cancer is another common type of gynecologic cancer that is one of the top causes of cancer-related deaths in women globally. Every year, a large number of women in India are diagnosed with this illness, and regrettably, due to a lack of knowledge and inadequate cancer screening facilities, the majority of women are diagnosed when the cancer has advanced. In addition, HPV (Human Papillomavirus) infection causes a substantial proportion of cervical malignancies.

Regular cancer screenings, as well as the PAP test for HPV detection, are critical for early detection. Cervical cancer can be treated with radical surgery alone if identified early, but those detected later require a combination of chemo and radiation therapy.

Vaccinating young girls to prevent HPV infection before they become sexually active is a highly successful method of preventing cervical cancer and many other types of gynaecological cancer.

Uterine cancer is a type of gynaecological cancer that develops in the uterus. Obesity, diabetes, hypertension, usage of oestrogen without progesterone, and other variables that enhance the risk of uterine cancer can occur in anyone.

In most cases, endometrial cancer is detected early and treated with laparoscopic (minimally invasive) surgery. In most situations, the full treatment involves only 2-3 days in the hospital. Though a small percentage of endometrial cancer patients (approximately 10-15%) may require further treatment in the form of radiotherapy or a combination of radiotherapy and chemotherapy.

Another type of ovarian cancer is germ cell tumour, which is typically observed in younger people. About 95 percent of these cases are curable with surgery alone, while some cases may require further chemotherapy. Fertility preservation therapy (sparing the other ovary and uterus) is frequently favoured for treating germ cell tumours in young patients.

Stromal cell cancer, the third form of ovarian cancer, is often slow-growing in nature. The vast majority of such situations are curable only by surgery.

Vulvar cancer is an uncommon type of gynaecological cancer that affects the outside of the female genitalia. It typically affects elderly women and is easily identified by the following symptoms:

Vulvar carcinoma is a form of gynaecological cancer that is highly treatable. In most circumstances, major surgery is adequate to treat vulvar cancer; but, in other cases, chemotherapy and radiation therapy may be required.

Vaginal cancer is one of the most uncommon types of gynaecological cancer. It often affects women over the age of 50, and in most cases, HPV (Human Papillomavirus) infection is the cause of cancer. The following are the symptoms:

Many cases of vaginal cancer, like vulvar cancer, can be treated with radical surgery, while others may require radiotherapy and chemotherapy.

Gestational trophoblastic disease (GTD) refers to a group of tumours that develop during pregnancy. These tumours are likewise uncommon. These tumours typically begin in the cells that would become the placenta during pregnancy. The tumour begins in layers of cells called trophoblast that surround the embryo and is usually benign. These cancers are highly treatable and are typically treated with chemotherapy.

For advanced gynecological cancer treatment, book your appointment with our best gynecologist in Mumbai at KK speciality clinic and hospital.

Request a Call Back

Fill in your details and our team will get back to you within 24 hours.

Fill the form to get further details